by Laura Bowers on December 23, 2015
in Publishing News

Congratulations and a major woo-HOO to David Teague for the December 8th release of his second picture book, THE RED HAT, with Disney Hyperion, illustrated by Antoinette Portis!

Billy Hightower spends his whole life alone in a skyscraper high above a big city. Then one day, a skyscraper is built next door and a girl moves in. Could she be a friend? But every time Billy tries to reach out to her, the wily Wind gets in his way Can Billy find a way to outsmart the Wind and make a new friend, or will he be swept away? 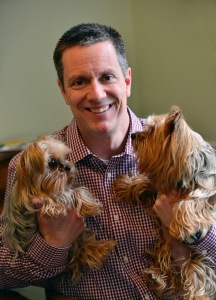 David Teague lives in Wilmington, Delaware, with his family: the astounding novelist Marisa de los Santos, the beautiful singer Annabel, and the jazzy pianist Charles. He teaches literature at the University of Delaware, works in the library at Charles and Annabel’s school, and loves to read books–silently, out loud, in bed, in the back yard, and in the side yard. He plays the violin but doesn’t practice enough. In David’s opinion, Boris Kulikov, the illustrator of “Franklin’s Big Dreams,” rocks!

Previous post: I did it, NaNo was a Go Go!